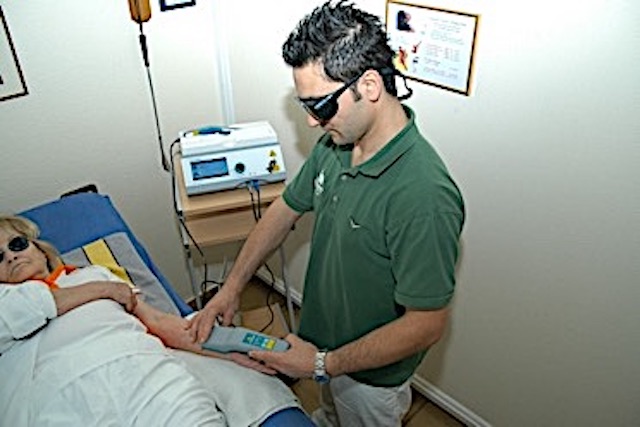 Laser is one of the most important achievements of the 20th century and opens up a wide spectrum of new possibilities in science and technology. Today, different laser applications play a significant role in modern medicine. Medical science distinguishes between two areas of application: the hard laser used in surgery and the athermic, low-level lasers used in therapy. The latter is the application type relevant for physiotherapy.

Laser is attributed to the field of phototherapy. Laser beams are thus rays of light, but three properties differentiate them from light which originates from "normal light sources".

Clustered beams:
laser beams have a uniform wavelength and consequently, a defined frequency.

Coherence:
the monochromatic laser beams can also oscillate in phase, i.e. maxima and minima of the electric and magnetic fields oscillate synchronously and propagate in the same direction.

Collimation:
due to the spatial coherence, laser beams propagate in a parallel manner, the beam divergence is low.

These properties allow for the projection onto small areas with a high energy density which is utilized in laser therapy.

In contrast to the photothermal effect of hard lasers, the “low level laser” has an athermal effect on tissue and is based on multifaceted, complex photobiological actions. Today, infrared diode lasers are primarily used for low level laser applications in physiotherapy.

Effect on cell level
Photobiological stimulation of the mitochondria by activating the ATP synthesis and the glucose metabolism, causes an increase in its level. An improved energy management in the cells leads to the promotion of cell mitosis, as well as to an increase in the specific cell activity with an increase in the different organs, e.g. immunological/antiphlogistic etc., functional increase, such as improved microcirculation, e.g. change of the neuromuscular tone, sensitive/allergic reactions, analgesic effects, psychosomatic relaxation. These changes in potential are the prerequisite for an energy flow which acts as a trigger for transmitters or meridians which in turn bring about remote effects.

Tissue-reparative effect
Accelerated and improved wound healing. In the case of open wounds, a reduced formation of keloids at the scar could be observed.

Analgesic effect
Pain-reducing effect in the case of post-surgical, post-traumatic, neurogenic, neuropathic and chronic pain, such as pseudesthesia.

Modes of action of laser puncture
Just like needle acupuncture, laser puncture utilizes the interaction between the skin and the inner organs.